What Was Pivot’s “First Step”? Throw A Party!

After years of preparation and months of planning, the first group of potential participants was introduced to Pivot Ministry with games, laughter, food, information, presents, and much enthusiasm. Eight potential participants were identified after having two interviews with Site Coordinator Carol Polk, and showing a continued interest in Pivot’s program. On February 27, 2018, each attended an orientation event at the Enterprise Center to meet potential mentors and hear from class instructors at what Polk called “Pivot First Step.” 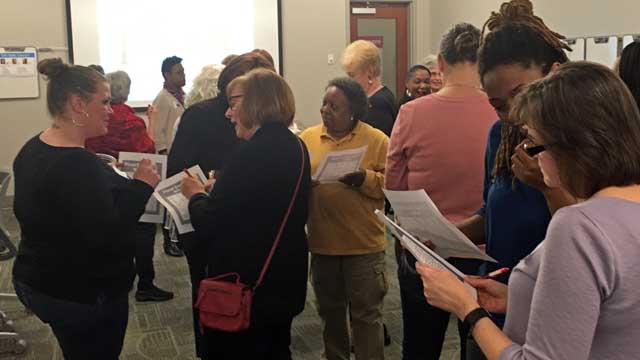 After some mingling and small talk among the attendees, volunteer Donna Bissette led a get-to-know-you Human Bingo game compiled by Lisa Turner. All participants, mentors, and instructors excitedly asked each other questions in order to fill out their Bingo cards. Gift cards were awarded to two participants who won the Bingo game.

Upcoming Pivot classes were introduced in game-style fashion by volunteer emcee Kathy Wilson. In this Share & Shift exercise, participants rotated around the room to tables where instructors and mentors had five minutes to give an overview of some of the classes that would be offered. Thank you to Ieisha Carter, Leslie Cox, Debbie Loftis, Marie Robertson, Sheryll Strode, Lisa Terry, Beth Warfford, Lori White, Carol Wilson and Pivot’s mentors who hosted the tables. 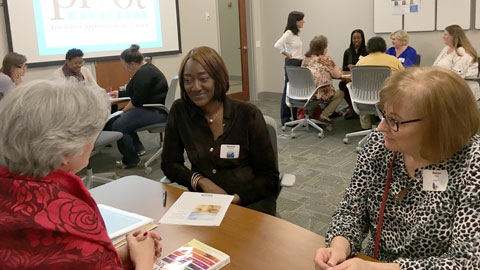 What’s a party without food?

What’s a party without food? A table covered in heavy h’ors d’oeuvres gave attendees plenty to choose from, enough for an early dinner, and leftovers for some. While they ate, participants watched a short video about the Christian Women’s Job Corps national model on which Pivot is based. The video included testimonials from other sites’ graduates. The group then heard some encouraging words from Carol Polk. Thank you to members of Ardmore Baptist’s World Hope missions group, as well as Donna Bissette, Lisa Turner, and Terri Jeffares for providing and serving all the wonderful food.

By the end of the event, all the participants were excited and ready to commit to attend the classes starting on March 1. As a parting gift, each was given a stylish tote bag filled with lots of goodies. Thank you to volunteers Patty Stockner and Sylvia Pickett for providing the gift bags and contents.

The Enterprise Center, site of “Pivot First Step” event and the weekly classes, deserves special thanks for their generosity in providing a space that is convenient to bus lines and well equipped with all the needed amenities. Also, thank you to volunteers Kathy Stewart for serving as photographer for the event; Jim Mabe for designing a presentation that highlighted Pivot’s benefits; Mary Simmons for exploring volunteer roles with Pivot; Gail McAlister, Merle and Larry Andrews for helping plan, set up, and clean up for the “Pivot First Step.”

All of the planning and effort made for a wonderful evening and, weeks later, Pivot’s participants still recalled “their party” as the first step to a new, life-changing adventure. 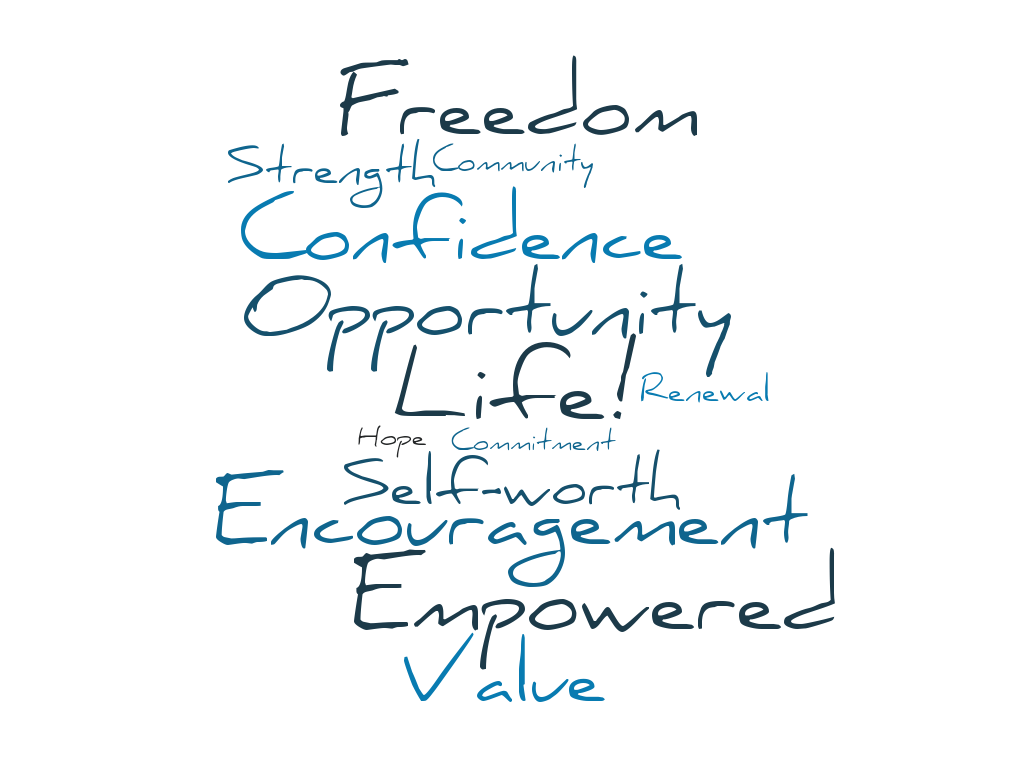 Some Key Points About Poverty

1. Poverty and wealth are relative. We basically know our own poverty or wealth only in relationship to others.

2. Poverty occurs in all races and countries.

3. Generational and situational poverty are different. When a family has been in poverty two generations or more, there are certain patterns and habits. In situational poverty, resources are temporarily reduced, but the mindset remains largely with the middle-class norms and values.

4. There are hidden rules in each of us related to the economic group in which we were raised.

6. The fundamental reasons for poverty are lack of educational attainment and the disconnection of family and/or community.

7. Four reasons one leaves poverty: It’s too painful to stay, a vision or goal, a key relationship, or a special talent or skill.

Source: What Every Church Member Should Know About Poverty (2012) R.K. Payne & B. Ehlig.
Reprinted with permission. aha! Process, Inc.